Here’s another touring book from outoftheblogosphere.com! This one’s by the esteemed Angela Knight, so I know you’re already on the way to the store. Again, I’m having issues with my images—Think I need to take a computer class?—so if it disappears on us, please click the cover link to get a peek at the hero.

MASTER OF WOLVES by Angela Knight 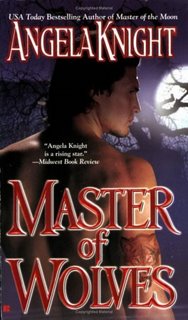 When Jim London's best friend is murdered, Jim vows to catch the killer. Leaving it for the local police to solve is out of the question, because he suspects they are involved.

Jim is more than capable of taking action if they are -- he's a werewolf. Realizing the only way to investigate the department is from the inside, he decides to go undercover -- as a police K-9.

His "handler" is lovely Faith Weston, the only person on the Clarkston Police Department who isn't up to her neck in murder. But Faith has no idea her "dog" Rambo is a werewolf, or that the department she serves is rotten with corruption.

But it doesn't take her long to figure it out.

Angela Knight's first book was written in pencil and illustrated in crayon; she was nine years old at the time. But her mother was enthralled, and Angela was hooked.

In the years that followed, Angela managed to figure out a way to make a living -- more or less -- at what she loved best: writing. After a short career as a comic book writer, she became a newspaper reporter, covering everything from school board meetings to murders. Several of her stories won South Carolina Press Association awards under her real name. For more of Angela’s interesting bio, visit her website: http://angelasknights.com/bio.htm

Posted by Chris Marie Green/Crystal Green at 7:36 AM