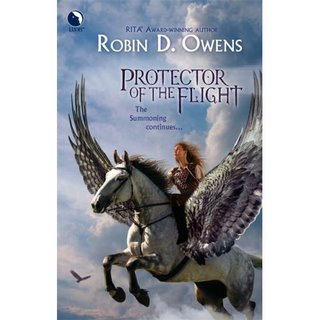 Here's another of Robin Owens' wonderful fantasies! I like the horse angle--I, myself, haven't read any fantasy quite like this. Enjoy, and stay tuned for another sneak peek at a book later today--and it'll be a novel written by one of our own! (Come back later to see who it is....)

PROTECTOR OF THE FLIGHT by Robin D. Owens
Luna February 1, 2007

Fans of Anne McCaffrey and Mercedes Lackey will appreciate the novel's honorable protagonists and their lively animal companions.

If horses could fly...

Then Calli Torcher might ride again. But a devastating accident left her in such pain, she thought the chimes and chanting in her ears were a hallucination...until she found herself transported to another world, and met the Lladranans who had Summoned her.

Lladrana was a parallel, magical earth filled with exotic creatures, noble humans and magic–-all threatened by an encroaching evil.

And when the might volarans stopped obeying the Chevaliers, the flying horses' unexpected rebellion had thrown Lladrana into an uproar. In desperation, the sorcerers had sought help from afar--and gotten Calli. If she could fulfill this mission perhaps she would also finally find all she had longed for – a mate, a home, a family. But against this great darkness she had no battle experience, no strategy plans. She had only a bond with horses...

Robin D. Owens has been writing longer than she cares to recall. Her fantasy/futuristic romances finally found a home at Berkley with the issuance of HeartMate in December 2001. She credits the telepathic cat with attitude in selling that book. Since then, Heart Thief was a launch book for Berkley Sensation in June 2003, Heart Duel was published in 2004, Heart Choice in 2005, and Heart Quest in 2006. Her Luna Books series includes shape-shifting fairies and average American women Summoned into another world to fight monstrous evil.

Owens has an easy and engaging writing style which, when combined with her intriguing characters and interesting setting, makes for a fast and compelling read.

This is among the most joyful series of novels in any genre...when the ending page arrives, YOU feel the Snap, pulling you reluctantly back to the real world. Ms. Owens has mastered characterization, interweaving the lives of previous main characters with those of the new expertly, so you meet new friends and catch up on the old. – Amanda Killgore, Huntress Reviews


Website: http://www.robindowens.com
Posted by Chris Marie Green/Crystal Green at 8:25 AM