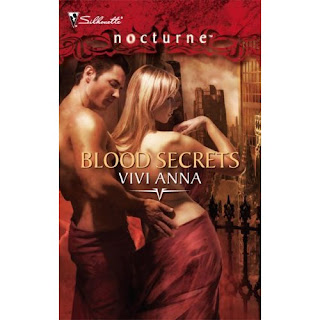 A young human woman is found ritualistically murdered in a downtown Necropolis hotel. It is up to Caine Valorian, a 200-year-old vampire, and his Otherworld Crime Unit to solve the unusual crime, and quickly before the human press can jump onto the story and cause a panic. To add to their already tough case, a new member, Eve Grant, transfers to their lab at the request of the mayor. Not only is she green and eager to impress the boss, but she's human. The first human ever to work in an Otherworld unit. The mayor thought it would be great press especially now with the strange human murder.

Caine has his work cut out for him, especially with his unruly team who don't appreciate any help from a human. Not only is this the toughest case of his career, but he's unusually attracted to the new girl, which can only cause trouble for them all. However, as they sink deeper and deeper into the workings of the case, Caine and Eve become closer and closer. So close that neither of them can see past each other and at the real happenings behind the scenes. The more they poke and prod at the case, the more they realize that something is going on, that this murder is only one step toward a greater purpose. Someone in the Otherworld community is calling on dark forces, in a plot to wipe out the entire human population.

A bad girl at heart, Vivi Anna likes to burn up the pages with her original unique brand of fantasy fiction. Whether it's in ancient Egypt, or in an apocalyptic future, Vivi always writes fast paced action-adventure with strong independent women that can kick some butt, and dark delicious heroes to kill for.

Once shot at while repossessing a car, Vivi decided that maybe her life needed a change. The first time she picked up a pen and put words to paper, she knew she had found her heart. Within two paragraphs, she realized she could write about getting into all sorts of trouble without suffering the consequences.

When Vivi isn't writing, you can find her causing a ruckus at downtown bistros, flea markets, or playgrounds.

If you like CSI, you'll love this smart, sexy and suspenseful trip through Necropolis where the villains are vamps, werewolves and witches--and so are the good guys. Strong, sexy Caine Valorian is a vampire to die for. He's also the head of the crime unit that cracks the supernatural cases no human is brave enough to tackle. Except beautiful but businesslike Eve Grant. Sparks fly - in and out of bed - when Caine and Eve pool their talents to fight unspeakable evil. – USA Today best selling author, Rebecca York

A new series begins on a strong note with compelling characters that draw you into their world, showing it to you in a way that explains without bogging down the narrative. This is a solid mystery that is enhanced by the romantic and paranormal elements. I look forward to seeing more from this author – Eternal Night Review

Posted by Chris Marie Green/Crystal Green at 7:46 AM