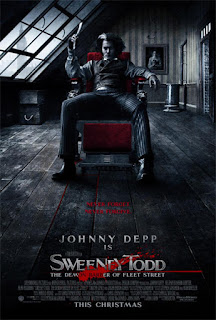 Check it out, you all—part of my Paramount swag! I also received a very nice copy of the Cloverfield teaser poster, a STAR TREK teaser poster, and an IRON MAN mini-poster. All of them are supposed to be Con exclusives, so I’m thinking of framing a couple of these babies. Can you see Sweeney Todd on my wall? Um, maybe not. It might freak me out too much.

As for today’s activities: way more relaxing than yesterday. I avoided the massive Hall H and went to only one panel—the Rob Zombie remake of HALLOWEEN/Stephen King’s THE MIST panel. (However, tomorrow will be a major day, with the HEROES panel, BIONIC WOMAN preview, and the Joss Whedon discussion if I’m lucky enough to get in to the room where all these are being held.) I also had my ULTIMATE BITE book signing.

I’ll talk about that first. It was so very fun. Farah the Fabulous (from Harlequin marketing) and Tony “awesome art director” were on hand to facilitate the free books that were given to any interested parties. I signed a lot of copies and meet many, many cool people; one was named Christina, and she’s going to email a picture of the two of us at the signing. Sweet! To all of you who stopped by, thank you so much. You, too, Farah and Tony. It was a great pleasure, and I would love to do it again next year. Maybe I’ll even be signing the sequel to THE ULTIMATE BITE….

Now, for the panel.

Okay, honestly, I’m wary of remaking a movie that hit the target so effectively the first time out. The original HALLOWEEN has always scared the tar out of me, and I’m not sure it can be any more frightening now, especially if Michael Meyers’ background is explored. Illuminating his “evilness” might be interesting, but it doesn’t escalate the horror for me—it’s almost like shedding light on the shadow in the closet, you know? At any rate, if a remake is to be done, Rob Zombie is probably the man to do it—he’s capable of retaining the gritty, old-school vibe that I love about the original. If you’ve seen HOUSE OF 1000 CORPSES or DEVIL’S REJECTS, you know that he’s already nailed a slightly tamer LAST HOUSE ON THE LEFT raw horror tone that could work very well for HALLOWEEN.

The panel started with the trailer, which makes it clear that we will be delving into pre-murder spree Michael Meyers territory. Then we get stalking and screaming and scaring—just what the audience will be craving when they go to see this movie. It’s effective. Then Zombie, himself, plus Sheri Moon Zombie (who plays Michael’s stripper mother), Taylor Mane (Michael Meyers and Sabretooth from the first X-MEN movie), and Scout Taylor-Compton (Laurie Stode) came on stage to field questions. Rob Zombie seemed to be eager to get the panel done and over with, and that was fairly amusing because he wasn’t tolerating any silly questions. His wife was quite delightful though, clearly a favorite with the male fans. We learned that the movie hasn’t been finished yet (release date: August 31) and then we saw exclusive footage of Michael dragging Dr. Loomis (Malcolm McDowell) into a house and then Michael going after Laurie. It was basic horror movie stuff, but not bad at all.

Notable? Michael Meyers is much more physically imposing than he was in the original, and I’m not sure how I feel about that. It creeps me out a little more if a slasher’s strength comes more from his twisted brain than his brawn.

Best question of the panel? “Are there any plans for you to make a movie about Nazi werewolves?” Zombie’s facetious answer: “We’re working on it. We really feel that the truth must be told.”

I haven’t heard a whole lot about this project before today, and I suppose that’s a good thing. As cast member Thomas Jane said, you want to go in knowing as little as possible with this movie. I can see what he’s saying, too. Based on the first exclusive scene we saw, the film, which sounds a lot like the premise for THE FOG upon a superficial glance, has an oppressive and tense tone (in a good, good horror-movie way). Basically, it’s about a group of people trapped in a supermarket when the mist closes in on them—and the elements contain some kind of monster. Frank Darabont obviously knows what he’s doing to create the best kind of scary movie: one that is disturbing and taut and filled with dread.

Case in point: the footage showed a bunch of guys testing what might be in the mist, and damned if I wasn’t getting nervous as they rolled up a door and the mist swirled there, apparently harmless. Then you can guess what starts to happen next….

A second batch of exclusive footage reminded me of one of my favorite books ever—King’s THE STAND. What I loved about that story was the characters and how they either stood up to the worst or became a part of it as society recovered from a horrific disease. I didn’t want that book to end because King immersed me in that world and made me a part of that community; I deeply cared about what happened to each of those characters. THE MIST seems to hearken back to this, and I can’t wait to see how these people evolve (or devolve) during the course of the story.

And that was the end of my day. But, as I said, tomorrow is pretty big, so tune in to see what I find out about HEROES and BATTLESTAR GALACTICA!
Posted by Chris Marie Green/Crystal Green at 9:14 PM