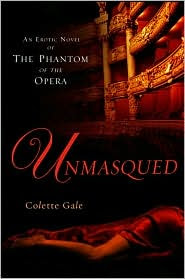 Maybe you guys have heard about this book, because it's certainly caused some online waves.

First off, UNMASQUED is a retelling of THE PHANTOM OF THE OPERA, which is, in itself, a grandly risky endeavor, seeing as the musical has produced a number of diehards who like the story the way it is--darkly romantic with a lot semi-chaste yearning woven through the action. (I'm not talking about the original book though; even the musical took its liberties with that.)

Feathers were bound to be ruffled with this fictional effort. And I do mean bound in its sauciest way.

Penned by Colette Gale, the pen name for a well-known historical author (and I'm pretty sure I know who it is, but I'm not positive, so I shouldn't say), the book uses the most of the basic story structure and adds lots of spice. LOTS. I'm talking about Anne Rice (A.N. Rolquelaure) SLEEPING BEAUTY lots. There's so much sex between so many people that, after a while, it doesn't even seem like sex any more. Scenes become exercises in how many funky toys can be utilized in how many orifices. Still, I kept reading. And reading. And reading.

As you would expect, the action follows ingenue Christine Daae, the rising star of the opera, and at least early on, the book recalls the musical in many instances. But then we meet Erik, who's more of a brooding, misunderstood hero than the sociopathic menance we are used to (even though musical kept the Phantom's violent, vengeful edge, and I suppose that's why Christine didn't end up with him). It's a smart change in order to make this more of a romance, although he really isn't the same character.

And the sex? Hot, manic, and very dirty. Sooooooo dirty, you all. This is definitely one to hide from the kids--and that's kind of a good thing.

Oh crap, gotta have it now. Sooo many books to read. AH! I loved the origninal book and I LOVED, The Count of Monte Cristo, one of my fav books, that book got me into reading the Classics. I love the cover of Unmasqued. Have a Great Weekend, Big Hugs!

LOL. I think you would totally like this one (from one hot-writing author to another!). It's not for everyone though....
Hope you're having a great one, too.