I thought I would just share a few snaps of what I was looking at in London. The trick is for me to show you what I experienced without giving away too much about what I was researching. After all, two books still have to come out in the first Vampire Babylon trilogy, which takes place in Hollywood. Then the action is going to shift overseas for the next trilogy, which is going to feature its own story arc (almost like each trilogy is its own TV season).
Now, just a note about pictures in general when it comes to me: I *hate* having my image captured by film. Looking at snapshots with me in them is just...wrong. It's not that I think they steal my soul or anything, it's just...yikes. Bleh. Get that thing out of here. You know what I mean?
Anyway, here we go!
I used what was left of my first day to travel to Jurys Inn just outside of Central London and wander the streets of Croydon. Even though it seems I wasn't in the thick of things in this "commuter area," I was across the street from a huge mall which contained a Marks and Spencer. I adore M&S, mostly because they have a food hall that's ideal for stocking a picnic. So I snatched up some apples and "flapjacks" (treat bars that are basically held together by oats, sugar, and lots of butter), toodled around High Street with its shops and pubs, then crashed in bed. Sleeping on the airplane is always a bitch, and I'm no match for the demanding god of slumber.

Jet lag allowed me to arise at 4:15 am, which was perfect, seeing as I had to start the day out early. I was scheduled to meet Claire from London Walks because I had arranged a private tour that would focus on some significant research for Vampire Babylon. So, in the dark, I strolled to the train station--which was only five minutes away from Jurys Inn--then caught a ride to Victoria Station in Central London. (As I noted in a previous entry, staying outside the deep city is really cost-effective. You get so much more room and comfort for the money, IMHO, and it's very easy to travel where you need to go.)

Claire--a classy woman who educated me about some fun Brit sayings that I'm totally using in the upcoming books--drove me to Bath, where I had two appointments with "public schools" which I won't name. What's confusing is that in England, a "public" school is what we think of as "private" here in the States. A "state" school is their "public" school, so I had to get used to the terminology right quick.

Bath in itself is beautiful--I'd been there before--but I won't be using it for a setting. I needed a spot closer to London itself, but as you'll see in an upcoming post, that's taken care of. However, I'll be using a lot about these schools I visited. Here are some pix: 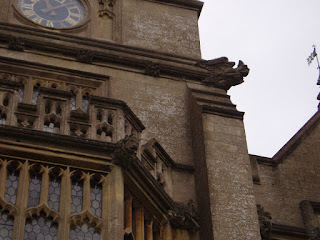 Note the gargoyle detailing. How's that for atmosphere? 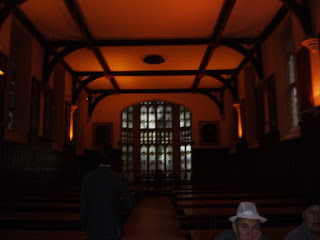 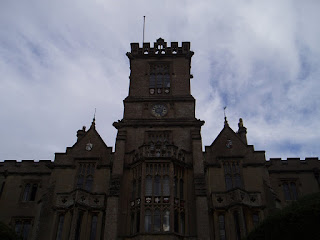 Suitably cloudy and gloomy--and check out this architecture. Also, this particular school has quite a history. An eccentric millionaire who gained his fortune "on the back of slaves," donated his land for this school. You don't think I'll be using a riff on that for this location's background?

I'll be back in a couple of days with more photos. In the meantime, have a Happy Thanksgiving to all those who are celebrating it!
Posted by Chris Marie Green/Crystal Green at 7:34 AM

Happy Thanksgiving! You're pics look great! Oooh, giving me ideas and a reminder I need to finish reading a story about gargoyles. Ugh. Stories on top of stories. Guess what! I got Unmasqued yesterday. I haven't started reading it as I'm reading a Mary Russell mystery and trying to write. Anyway,I can't wait to read more about your trip:-D. Big Squishy Hugs. lol.

Hey, Nicole! Hope you're going to have a fun day tomorrow, too. And that's great that you got some inspiration from these pix. These were such wonderfully gothic places, and Claire and I had lunch in Bath to boot. I already want to go back.

Oh, ho, ho--I hope you enjoy UNMASQUED! Right now, I'm listening to an Alison Weir book about Lady Jane Grey, and I'm reading HIDE by Lisa Gardner. It's *really* good. I'm also delving into some research books and hoping to start WHAT FALLS AWAY soon because it's been on top of my TBR pile for eons.

Have a great Turkey Time!

Wow! I had no idea you were on a huge adventure! Why oh why did I set my book in Phoenix??? :)

Barrie! I wonder if this means you'll be coming up with a new series that's set in a place you've always wanted to see, LOL. Can't wait to read your first published book!