One of my pals, Tony Sandoval, is a serious comic reader. He's been collecting for years, and he's into superheroes as well as more literary graphic novels. Basically, Tony has been my go-to guy for comic reading suggestions, and he turned me on to Grant Morrison.

If you don't already know, Morrison is a major writing talent who crafts amazingly layered stories. I don't hesitate to call him a genius because, truly, some of his works deserve the study and care we give to other genre classics. I've read his fourth-wall-breaking take on ANIMAL MAN as well as the heart-wrenching, thought-provoking WE3, which gives us a dog, a cat, and a bunny who have been trained to become killer soldiers. (I know! But take my word for it--if you read WE3, you're going to get a big old lump in your throat as well as a huge guilt complex. Damn you, Tony, for not telling me to read WE3 in the privacy of my own house, where I wouldn't have minded becoming a blubbering idiot!)

When Tony recommended ARKHAM ASYLUM: SERIOUS HOUSE ON SERIOUS EARTH, I was totally up for it. After all, as we know, Arkham Asylum plays a big part in Batman--it's where all the criminal geniuses go after the Bat catches them.

But this was no regular Batman story. Oh, my God, no. 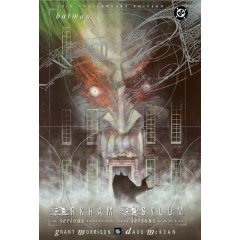 This book was creepy beyond anything I've read or even seen in the last few years: from the abyss-deep content to the truly unsettling artwork by Dave McKean (who also did SANDMAN), AA plunges you down into a murky terror where everything from Norman-Bates-like mother complexes to Lewis-Carroll-madness is explored.

I could write a thesis about AA, but here's the basic story: the inmates have taken over the asylum, and they're holding hostages. And guess who's in charge? Yeah--the Joker, and he's at his most gleeful evil. He invites Batman to come on in and take back the premises. Thing is, Batman has some dark issues of his own, and when he decides to go into Arkham, it's at the risk of his own sanity. The main plot is supported by the backstory of the asylum, which was founded by Amadeus Arkham--a man who had his own demons to contend with--and as Batman fights to save the day (or, more to the point, to save himself), his story intertwines with Arkham's.

The complexity and flow are things of storytelling beauty, but they're as dark as dark can be. McKean's artwork (which is glorious in how it uses different techniques to convey mood and substance) offers a smudgy, shadowy Batman, and it's disturbing to never get a true grasp of our "savior" (but the unformed images of Batman are symbolic in that he doesn't even know what he is). Then there's the heavy gore and violence, but every drop of blood serves its purpose. If you read the 15th anniversary edition, you'll be able to see Morrison's script and notations, and it's well worth some study since it illuminates so much more about the novel itself.

Tony also sent me a link to a minimovie that some Spanish filmmaker/fanboy made for ARKHAM ASYLUM. It's one of those YouTube things that blows your mind because it's so well done. It even captures the graphic novel's tone with nightmarish accuracy. (Check out the Joker. Ahhhh!)

Here it is, but I warn you--it's bloody and intense. Definitely R-rated. And it compresses the novel, so you're going to get the entire story here. But having said all that, it's so worth a view.

Posted by Chris Marie Green/Crystal Green at 9:21 AM