We haven't had an Outoftheblogosphere book on tour for a while, but this is the last one of 2007. (Sigh.) At any rate, I know there are a lot of Gena Showalter fans out there, so this release is probably making you giddy! The first book in this series is near the top of my To Be Read list, so I'm looking forward to getting into this world.... 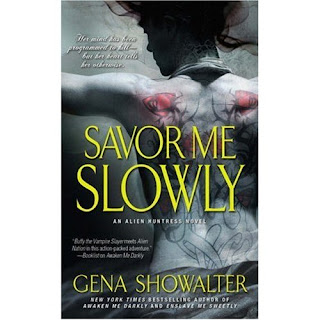 Mishka Le’Ace was created to be an undercover operative . . . literally. Her beautiful body has been mechanically augmented to give her superhuman strength -- strength she’s going to need. Her latest mission sends her to rescue Alien Investigation and Removal agent Jaxon Tremain from torture and death. With him, she discovers a passion unlike any other. A passion she was forbidden to know. . .
From the moment they meet in a darkened cell, Jaxon craves her touch. But the machine half of Le’Ace forces her to do things she doesn’t always want to do. Even betray him . . . and ultimately destroy him. Now Jaxon must battle the man controlling Le’Ace and even Le’Ace herself to at last claim the woman he’s come to love.

ABOUT GENA SHOWALTER:
Gena Showalter sold her first book at the age of 27. Three years later, at the ripe old age of 30, she had sold an amazing total of 15 books in a multitude of genres: paranormal romance, contemporary chick lit/romance hybrid, young adult and urban fantasy. Her books provide something for every fan of fiction. For more information about Gena and her novels, you can visit her website at www.genashowalter.com and her blog at www.genashowalter.blogspot.com

"In versatile Showalter’s new futuristic novel, the world teeters on the edge of disaster unless a tough band of human and alien allies can stop it. Danger spiced with sizzling sensuality are definitely hallmarks of Showalter’s style. Kicking butt and taking names is what these protagonists do best which cranks up the action quotient for this intense new book!" – Romantic Times

SAVOR ME SLOWLY is the third and strongest installment in Gena Showalter’s Alien Huntress series. As riveting as the previous two books were this one is better. Fresh Fiction

"The characters in this book are flawlessly drawn. . . Science fiction at its best! So if you’ve never picked up a story by this talented author, now is the time to start. " Two Lips Reviews -- 5 lips, their highest rating!


Website: http://www.genashowalter.com
Posted by Chris Marie Green/Crystal Green at 7:41 AM

Ooooooh, I got my copy of this one the other day. Can't wait to read it. :)

Merry Christmas to you, too, Y! Hope you enjoy the book. :)