Okay, the first thing I have to say is
CHUCK!
CHUCK is back and I’m more in love with it than ever.

I suppose you could say that I do get some CHUCK-levels of entertainment when Hiro and Ando are on HEROES. And there are flashes of wonderfulness about this show that keep me tuning in. However, I’m at the point where I’ve pretty much given up on following the mythology and my enjoyment is purely superficial. (For example, the number of shirts taken off tonight? Zero! Dang. Even CHUCK had at least two shirt-off moments. One of them was Captain Awesome, and the name does justice to him. I was way too interested in Chuck’s chest, too, because, let’s face it, I wouldn’t throw him outta bed for eatin’ crackers. Heh.)

So here we go with HEROES:

* Right off the bat I decide that I will go with the theory that Mama Petrelli is mindscrewing Sylar in order to get him to do what she wants him to do. I can’t deal with her really being his mom. Just…no.

* Someone needs to tell Future Peter that an upturned collar is not badass.

* “What kind of overconfident nemesis are you?” I adore Hiro’s meta-talk.

* I wish the Hatian would do his thing with Sylar. Do you know how much trouble that would save us?

* Love how the silent movie’s music is used in the Hiro/Ando scenes. Totally fun.

* You had to know that the African painter’s eyes would go white. Doesn’t he even have the same Tim Sale painting style that Isaac did?

* “I’m being awesome!” Ando gets the line of the night.

* Good job, Two Peters—time is frozen and you guys couldn’t take just a sec to move poor HRG out of the room as the New Villains sit there ready to attack him? Mean.

* Sooo…we’ve got a magic walkman that turns eyes white?

* Lastly, I want me some Sark!!! I can’t believe HEROES isn’t using him. Talk about a waste of talent.

What’s your take? Good, bad, ugly? Directionless? Or do you have hope for the coming adventures of our heroes?
Posted by Chris Marie Green/Crystal Green at 10:20 PM 4 comments:

Thought you guys might want to see a pic of Jeanne Stein, wonderful reader Dusty, and me at the Mysterious Galaxy San Diego signing. Dusty was kind enough to send this along to me, so I'm greatly appreciative.
If you were there--it was great fun meeting you, and thank you for buying my books! 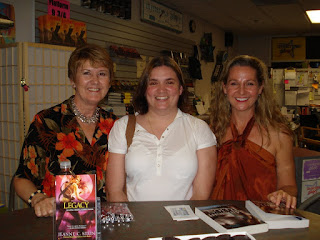 One of the highlights of this signing was the format: Mysterious Galaxy told us that we could read from our books, take questions, and/or interview each other. Jeanne and I weren't sure what to do at first, but we ended up doing the interview along with audience Q&A. Very cool!

My next signing will be on October 26 in Henderson, Nevada. Details will follow as we get closer to the date, but I can tell you that this will be a full-on Halloween event, complete with a horror film showing and other attending authors....
Posted by Chris Marie Green/Crystal Green at 2:02 PM 3 comments:

But is being back a good or bad thing for HEROES? What did you all think of the premiere?

Some of you already read my hint-riddled tease that I wrote after I saw the first hour of this premiere at Comic-Con (If you didn’t read it, click on this: http://crystal-green.blogspot.com/2008_07_01_archive.html and go to the third post down.). I was really optimistic when I saw it.

Then I witnessed the second hour. It was still good, but my attention kept wandering, and I think there’s a specific reason for that, because it tends to happen with characters I’ve completely let go of. One of those characters is Niki/Jessica…Tracy(?), but I’ll get to that in a second.

First, onto the bullet points that I use as a minute-by-minute comment board. Just keep in mind that I only watched the second hour tonight, already having seen the first….

* Suresh/Testosterone-Wallclimbing-SkinShedding SexFiend extends the fine tradition of Heroes who quite graciously take off their shirts for us. What took him so damned long, because…bab-uh. Methinks someone has been hitting the Pilates.

* After earning my good will, Mohinder immediately blows it by going all suckface on Maya. Gah. I now become bored with his continued moronic state of being and I tune out whenever he is on.

* I’m so happy to catch a glimpse of Adam in Mama Petrelli’s dream. Gimme hope for my Sark’s return!!!

* I never thought I’d be glad to see Elle, but, hey, I am. Whoa. Maybe it’s just because I miss Kristin Bell in general.

* So Niki is Jessica and Tracy? Huh? I decide to brush my confusion aside in favor of concentrating on the Greatest American Hero instead. Check out that soul patch!

* How great is it that Weevil and Veronica Mars are together again (or at least within close range of each other)? Let’s pray for some longer scenes to take advantage of their chemistry. Seriously, if you watched VERONICA MARS, you know that these two are magic together.

* All right, I’ll admit it—I’m utterly puzzled about anything that involves Ali Larter when it comes to this show. I never figured out her first character/s, and now we’ve got Tr-icy to contend with. The sight of her stultifies me.

* I’m cracking up at all the Batman-Catwoman-Robin stuff.

* LOL at Matt and the turtle moment.

* So do you all think that Mama Petrelli is actually Sylar’s ma or is she speaking metaphorically? Or is she just being the evil wench we all love and she’s messing with Sylar’s mind?
(I’m fervently hope it’s the last option….)

I'm the guest blogger at the Novelists, Inc. blog today. I'm talking about how my reading habits have changed along with my writing habits, and if you leave a comment, you'll have the chance to win a copy of the FIRST BLOOD anthology (signed by me).

Click here to visit (and come back for my recap for the second hour of HEROES. I already did a hint-heavy blog about the first hour in July....)
Posted by Chris Marie Green/Crystal Green at 9:09 AM No comments:

Just a reminder that I'll be signing with Jeanne Stein at 7pm tonight at Mysterious Galaxy in San Diego. If you want more info, here's the site....

http://mysteriousgalaxy.booksense.com/NASApp/store/IndexJsp
Posted by Chris Marie Green/Crystal Green at 10:19 AM No comments:

I'm guest blogging over at Simply Romance Reviews today about what got me started my fascination with vampires--and I'm asking about what got you all started, too. Also, I'm giving away two copies of MIDNIGHT REIGN, Vampire Babylon, Book Two, so click on the link to go to the fun!

Hope to see you there, as well as my booksigning with Jeanne Stein tomorrow at 7pm at Mysterious Galaxy in San Diego!
Posted by Chris Marie Green/Crystal Green at 9:19 AM No comments:

For those of you who are Special Edition readers, the authors of this line have created a new blog space on the eHarlequin boards. Karen Sandler has already written a good entry about foster parenting. I'll be blogging there October 7, but there are going to be other authors stopping by way before then.

If you want a look, click on this: http://community.eharlequin.com/content/silhouette-special-edition-author-blog

Have a great weekend!
Posted by Chris Marie Green/Crystal Green at 11:00 AM No comments:

You guys know I love my scary movies, and if I were able to right now, I'd rush right out to see this musical version of THE EVIL DEAD. (I know!)

(Just a warning: there's some use of the "F Word" in this clip.)

In your life, did you ever think this would happen? (I mean a musical about THE EVIL DEAD, not zombies in a remote cabin.)
Posted by Chris Marie Green/Crystal Green at 11:11 AM No comments:

Hey, while you're all at the book store (subliminal message: BREAK OF DAWN, BREAK OF DAWN), you might want to check this one out! Nalini's Psy series is great, great reading! 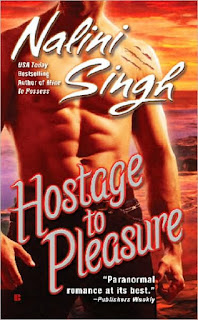 With her darkly seductive Psy/Changeling world, Nalini Singh has created "a sensual, dangerous adventure not to be missed" (New York Times bestselling author Lora Leigh). Now, as the deadly Psy Council tightens its grip, a rebel Psy scientist finds herself at the mercy of a changeling who has sworn vengeance against her kind...

Separated from her son and forced to create a neural implant that will mean the effective enslavement of her psychically gifted race, Ashaya Aleine is the perfect Psy--cool, calm, emotionless...at least on the surface. Inside, she's fighting a desperate battle to save her son and escape the vicious cold of the PsyNet. Yet when escape comes, it leads not to safety, but to the lethal danger of a sniper's embrace.

DarkRiver sniper Dorian Christensen lost his sister to a Psy killer. Though he lacks the changeling ability to shift into animal form, his leopard lives within. And that leopard's rage at the brutal loss is a clawing darkness that hungers for vengeance. Falling for a Psy has never been on Dorian's agenda. But charged with protecting Ashaya and her son, he discovers that passion has a way of changing the rules...

Nalini Singh has traveled as far afield as the deserts of China and the temples of Japan, but it is the journey of the imagination that fascinates her the most. She’s beyond delighted to be able to follow her dream as a writer.

Check out her website for excerpts, travel photos, and behind-the-scenes info on the Psy/Changeling series, as well as details of her new series, which kicks off with ANGELS’ BLOOD next March.

"One of the greatest pleasures of these books is their ability to deliver both an intensely personal love story as well as a riveting societal drama. Singh is on the fast track to becoming a genre giant!” ~ Romantic Times (4.5 Stars, Top Pick!)

"Hostage to Pleasure is a powerful story of two very different people finding love where they least expect it...Fans of this series will be happy with the world that Singh continues to build. I know I can’t wait to see what happens next."
~ Casee for Book Binge

"Perhaps this is the most exciting and complex yet of the books in this series. Ashaya's dilemma is certainly among the most poignant and Dorian as her damaged hero is irresistible.”
~ Huntress Reviews

“HOSTAGE TO PLEASURE pulls you in, grabs your attention, and ensures you are going to be reading every last word of this story. Brava, Ms. Singh! Compelling paranormal romance at its finest!”
~ Sarah for Romance Junkies

Website: http://www.nalinisingh.com
Posted by Chris Marie Green/Crystal Green at 8:19 AM No comments:

If you want to read random interview thoughts about Batman, Blue Fin martinis, and the release of BREAK OF DAWN, go here!
Posted by Chris Marie Green/Crystal Green at 10:55 AM No comments:

You can now buy BREAK OF DAWN at your local bookstore!

Also, this is kind of fun: the book trailer is being featured over at BarnesandNoble.com....
Posted by Chris Marie Green/Crystal Green at 10:07 AM No comments: 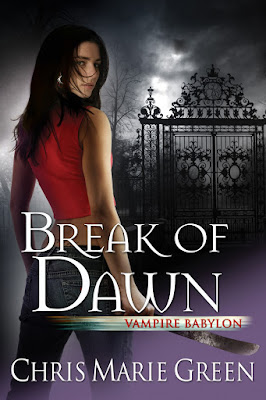 Just a reminder: BREAK OF DAWN is out tomorrow!

It feels like it's been years since I wrote that book (and it sort of has been years from the time I started chapter one until this release date). I'm actually writing book five now, and Ace has started moving the releases closer together--book four will be out in March and book five is slated for August (only a five month wait between books for and five. Wow.)....
Posted by Chris Marie Green/Crystal Green at 12:05 PM 2 comments: