Earlier in the week, I suggested the sizzle of SUBMISSION by Cherie Feather (AKA Sheri Whitefeather). For an equally wonderful read, I give to you ENTERTAINING ANGELS by my other friend and critique partner, Judy Duarte. 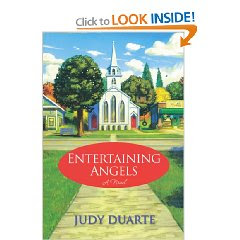 This is what could be called "inspirational women's fiction," and it continues the tradition of Judy's first book, MULBERRY PARK, where members of a community come together and improve their lives through love and companionship. This time, there's a stranger walking among them, and "Jesse" seems to have quite a knowing store of anecdotes that sets everybody's lives in a new direction. Here's the back cover blurb:

As a teen, Kristy Smith spent her nights dreaming of a college scholarship - dreams that ended abruptly when she became pregnant. Now Kristy works hard to support her young son, Jason, and her ailing grandmother, staving off regrets about the chances that slipped away. When Craig Houston became a pastor, he envisioned making a difference in some distant, poverty-stricken country, not dealing with youth groups and shut-ins in a tidy suburb like Fairbrook. But things aren't always what they seem. Soon, Craig finds locals who need guidance even if they'll never admit it - like Kristy's best friend, Shana, who's always strived to be the perfect daughter; Renee, a pregnant teen trying to make it on her own; and Kristy herself, a vibrant and loving young woman unaware of just how much she has to offer. One by one, the residents of Fairbrook are about to learn that the future can surprise and redeem us, especially when there is courage and true friendship in abundance, and a little help from an unexpected source...

So snap these up and have a great time! (BTW, Judy's working on her third book in this series, TAPESTRY, and Sheri just finished writing MASQUERADE. You've got awesome stuff from these authors in the future, too!)
Posted by Chris Marie Green/Crystal Green at 10:06 AM