Today I'll have two "new" releases on the shelves: 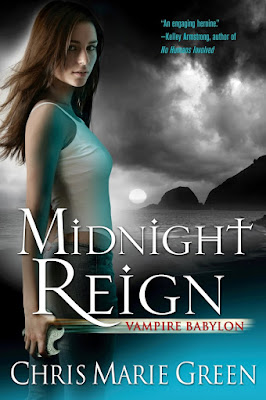 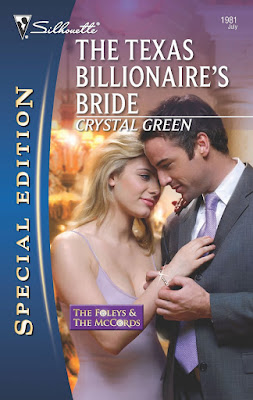 My latest Special Edition, THE TEXAS BILLIONAIRE'S BRIDE, which is the first book in the Foleys & the McCords continuity series.

To learn more, you can go to www.crystal-green.com and www.vampirebabylon.com.
Posted by Chris Marie Green/Crystal Green at 9:59 AM 2 comments:

Giveaway for The Texas Billionaire's Bride

Another giveaway! Besides Selena's generous contest that I posted about yesterday, you can go to Crystal Fulcher's blog, where she's not only giving away a copy of THE TEXAS BILLIONAIRE'S BRIDE, but she's posted an interview with me. Click here to go!
Posted by Chris Marie Green/Crystal Green at 8:01 AM No comments:

My Silhouette editor, Susan Litman, has an interview blog posted over at the NINC site, so you can go to http://www.ninc.com/blog/ to see it! Also, our Selena is having a birthday bash with giveaways! Go to http://selenaillyria.com/2009/06/birthday-bash-week-4/ to check it out...
Posted by Chris Marie Green/Crystal Green at 8:49 AM No comments:

A Good Kind of Signing

Hey, you all--so sorry about the lack of posts this past week. I've been messing about on a sort of vacation since I finished DEEP IN THE WOODS. This doesn't mean I haven't done a bit of work, too (such as a proposal that I just mailed, as well as brainstorming for a short story that'll be in a future anthology). It's just been "shorter" work.

I've posted a guest blog over at the Novelists, Inc. site, and it's about a signing I did a couple of weeks ago, and I met someone quite interesting there. To read about it, click here!
Posted by Chris Marie Green/Crystal Green at 10:29 PM No comments:

For those of you in the Las Vegas/Henderson area, I'll be at the Local Authors Day at the Green Valley Henderson Library from 1-4pm tomorrow, Saturday, June 13th. Other writers will be there, too, and we'll be selling books and answering your questions. These are the titles I should have with me:

Over at the Novelists, Inc., site, there's an interview with Maryelizabeth Hart, who does PR duties for the excellent bookstore, Mysterious Galaxy. I asked Maryelizabeth to join us for the day because Mysterious Galaxy is seriously fantastic, and the staff works their butts off to get good books into the hands of readers. Not only do they report to the New York Times bestseller list, but they arrange signings and book panels at Comic-Con (where I'll be on a panel this year again). They also hosted a booth at the L.A. Times Festival of Books, and dang, was that tent busy. Their staff is passionate about what they love and what they think you'll love, and if you wander over to their store in San Diego or their wonderful web site, you won't walk away empty handed.

So come on over to see what Maryelizabeth Hart has to say on the NINC site! Click here to go.

Posted by Chris Marie Green/Crystal Green at 7:10 AM No comments:

In the past, I've talked about what I read during the writing of one of my books. I'm a bit behind on this one, seeing as I turned in DEEP IN THE WOODS, Vampire Babylon, Book Six, about a week ago, but I thought I'd share this little tidbit with you.

Since the London trilogy portion of the VB series takes place in...well, London...I was listening to audio books that feature British speakers. Listening helps me to get the flow of the appropriate dialog and narrative. This time, my main source for audio cues was THE DIANA CHRONICLES, written by Tina Brown. This is a biography about Princess Di, of course, and it provided a lot of sheer entertainment along with auditory value for me.

I don't know about you guys, but Diana's death was one of those moments where I remember exactly what I was doing when I heard about it. So was her wedding to Charles. Like many people, I connected with her, even though I would never know her. So it was somewhat tough to read this book, which doesn't paint a worshipful picture of Diana at all--it features all those rumored flaws you heard about in the press like the bulimia, the manipulation of the tabloids, the affairs. What comes out of this document is a story about a highly conflicted woman who really did love Charles in a fantasy-driven way. Brown seems to blame this lack of reality in Diana's love life partially on romance novels, which I thought was interesting. (In fact Brown's disdain for them comes out very clearly.) But Diana also comes off as a very astute "tactician," and anyone who knew how to work the press as she did surely deserves such a title.

Worth a read if you want to see Diana in a light that shows warts and all.
Posted by Chris Marie Green/Crystal Green at 8:06 AM 2 comments:

Today I'm giving away a copy of my FALLING FOR THE LONE WOLF (the one nominated for a RITA this year) at the blog on the eHarlequin site. I also did a Q&A for my July Special Edition, THE TEXAS BILLIONAIRE'S BRIDE today. The winner will be picked on Monday. Click here to jump over there!

Oh, and I saw THE HANGOVER. Really funny. You have to stay for the beginning of the credits because that's actually the most hilarious part. And, continuing my movie binge, I saw DRAG ME TO HELL, which had good scares and was quite (sickly) funny itself.

Win a copy of ONE FOR THE ROAD

Hey, guys, I'm guest blogging here today, so click on over! I'm talking about travel tips for writers and focusing on my new Blaze release, WHEN THE SUN GOES DOWN..., which takes place in Japan. I'm giving away a copy of ONE FOR THE ROAD, a previous Blaze, which was set on Route 66. See you there!
Posted by Chris Marie Green/Crystal Green at 7:33 AM No comments: 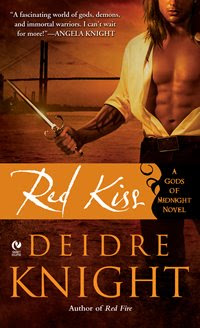 You all might know I'm with the Knight Agency. Here's Deidre Knight's newest book!!! (Congrats, Deidre.)

RED KISS
A Gods of Midnight Novel
by Deidre Knight

Immortal warrior and Spartan slave River Kassandros has a special gift—the ability to transform into any weapon. But in a recent battle, he was trapped as a dagger, unable to become human again. His one hope of salvation is a mere mortal…
When Emma Lowery beaches her kayak on an uninhabited island off the coast of Savannah, an ancient dagger seems to call out to her. Compelled by dark forces, Emma draws blood with his blade, freeing River. Now he’s stronger, angrier—and exudes more sensuality than Emma can resist.
But a sinister power wants to claim River’s destiny, and his precarious freedom. The pair must join the Spartan warriors to fight Ares himself. But can they face sacrificing their love to protect humankind from the war god’s demonic plan?

Deidre Knight is a literary agent, mom, wife, novelist and southern woman, and proud to answer to all of these titles. Before she founded The Knight Agency in 1996, Deidre worked behind the camera in movies and television. During the thirteen years since she launched her literary agency, she has grown The Knight Agency to national prominence, shepherding authors on to every major bestseller list.

After nearly a decade of working with Knight Agency clients, helping them discover their creative potential, Deidre’s dream of writing romance came true in the form of her debut series THE MIDNIGHT WARRIORS which launched with PARALLEL ATTRACTION in the spring of 2006. She has been nominated for a plethora of industry awards including the PEARL, the PRISM, the NOR, the JABIC and the STRCA.

Deidre's riveting new series, THE GODS OF MIDNIGHT, chronicles the journey of seven passionate and immortal Spartan warriors who battle demons in contemporary Savannah. The first book in the series, RED FIRE, was released on October 7, 2008, and the series’ next installment, RED KISS, premieres June 2, 2009.

“Ms. Knight did a wonderful job blending the old world sensibilities with the modern age.” – Eye on Romance

http://www.deidreknight.blogspot.com/
Posted by Chris Marie Green/Crystal Green at 7:12 AM No comments: