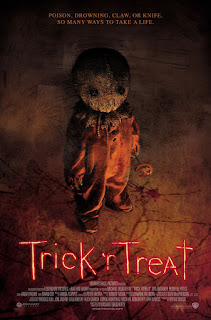 TRICK ‘R’ TREAT had gotten a lot of buzz previous to this DVD release. There was a question as to whether or not it’d be released in theaters to take advantage of a sort of cult following that developed from word of mouth and festival showings. It did get a limited release, and I’m pretty surprised that it didn’t get any more than that. It’s a good movie that reminds me a lot of TALES FROM THE CRYPT with a PULP FICTION structure; four main stories weave in and out of each other one night on Halloween in a small town. At some points in the story, you’re like, “I thought that guy was dead!” See? Tarantino-esque.

Now, I wouldn’t say this movie is scary-scary. It’s more atmospheric and creepy-funny. There are also moments of some very nice suspense. And I was surprised at the cast they collected: bigger names like Bryan Cox, Dylan Baker, and Anna Paquin as well as shoot-I-know-the-name-of-that-actor people like Helo from BATTLESTAR GALACTICA (and DOLLHOUSE) and that skinny blond chick from POPULAR.

The stories aren’t fabulously original or frightening—they’re more like comfortable, eerie ghost stories told around a campire. There’s a story about a “red riding hood” young woman who’s navigating the Halloween streets, looking for a guy who appeals to her virgin self. A story about a regular guy who just happens to kill people in his spare time. A story about a cranky old man who finds a malicious creature in his house. A story about a bunch of kids who were killed on a school bus. They’re all connected by the presence of a tiny little kid with a burlap mask who seems to be at every violence-ridden location.

The best things about this movie are 1) the lack of CGI and 2) the evocative “Halloween feel.” The first one is obvious: it’s awesome to see old school special effects being used. If there’s CGI, it was done so well that I didn’t notice. The second is a valuable element in a movie you’d want to watch during this time of year. You can practically feel the chill in the air and smell the fireplace smoke on the wind, just like on Halloween night. It’s a fun, ghoulish feeling yet, at the same time, safe.

I definitely enjoyed watching Trick 'r' Treat. When my sister found out Anna Paquin was in it. She made it my mission to get her a copy on blu-ray. Went to four different Bestbuys before finally finding a copy, lol! Got to say I love your choice of blog topics.

Hey, Veronica! You're a great sister. I'd love to see this movie on blu-ray--it's gorgeously photographed and I'll bet there'd be fun extras. Thanks re: the choice of blog topics. I love Halloween and getting into the spirit is *very* easy. :)

Thanks for sharing this, C! It sounds like a movie I definitely want to see. :) Oh, and it's good to hear that there's not much CGI. I fing that too much of it takes a lot away from the horror of it all. ;)

IMO, CGI works great for most movies, but not for hardcore horror.

Have a great day!

Yolanda!
It's fun to write about movies, especially scary ones. I'm soooo in the mood. I'm about to post another one....

You're right about CGI being particularly intrusive in horror. It's such a primal experience that good old fashioned models and movie magic work the best!