BREAK OF DAWN, Vampire Babylon, Book Three, is being reissued in mass market format today! If you haven't read the series yet, now's a great time to go out and get 'em! ; )

Also, it's Takeaway Tuesday on the Knight Agency blog, and we're giving away signed copies of NIGHT RISING and MIDNIGHT REIGN (mass market editions, books one and two), so come on over!!! 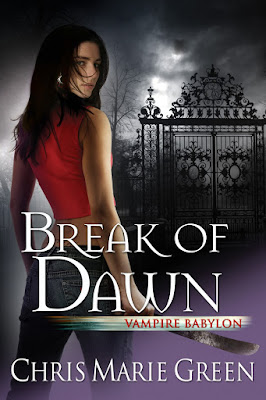 Hollywood: It Can Suck the Life Out of You…

After facing off against the lethal Vampire Killer, Hollywood stuntwoman Dawn Madison and her friends are reeling with shock. They’re injured, exhausted, and hurting in every way possible.

For Dawn, the pain is much more personal. She’s learned more about her missing father and long-dead mother than she ever wanted to know—a burden of truth that is straining her sanity. And her conflicted feelings about both her enigmatic boss Jonah, and P.I. Matt Lonigan are only making things worse.

Yet Dawn is still determined to save her father. Her private battle will lead her directly into the Vampire Underground, where she will encounter an unthinkable betrayal. And where, finally, the question of who is truly good and who is truly evil will become a matter of life, death—and undeath…

Thank you, m'dear! How are things going with you? CHUCK was so good last night. The Kristen didn't even bug me, and Shaw is getting hotter by the episode.

LOL! I loved Chuck. I'm conflicted, I don't know what to think about Shaw is he good? Is he bad? Ahhh. But Casey helping out Morgan, LOL.

And aww to Casey helping out Chuck. I can't wait to see next week's episode.