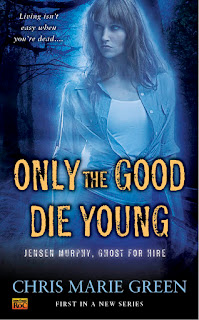 This is the first in my new Ghost for Hire series from Roc! Jensen Murphy is, yes, a ghost, and she's on the trail of a could-be murderer. Is he guilty? Or is she "booing" the wrong man into a confession?

Here's the full back blurb:

You know the theory that ghosts are energy trapped when someone dies violently? It’s true. I know it for a fact...

My name is Jensen Murphy, and thirty years ago I was just an ordinary girl. I had friends, family, a guy who might be The One. Ordinary—until I became a statistic, one of the unsolved murders of the year. Afterwards, I didn’t go anywhere in pursuit of any bright light—I stayed under the oak tree where my body was found, and relived my death, over an over. So when a psychic named Amanda Lee Minter pulled me out of that loop into the real world, I was very grateful.

So I’m now a ghost-at-large—rescued by Amanda (I found out) to be a supernatural snoop.  I’m helping her uncover a killer (not mine—she promises me we’ll get to that) which should be easy for a spirit.  Except that I’ve found out that even ghosts have enemies, human—and otherwise…


I've turned in the second book and am awaiting a date for that one, too. :)

Hope you like!
Posted by Chris Marie Green/Crystal Green at 6:29 AM